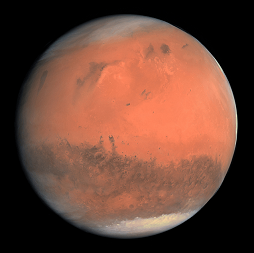 Our Solar system consists of 8 planets which are Mercury, Venus, Earth, Mars, Jupiter, Saturn, Uranus, and Neptune. Mars looks red due to iron oxide which is prevalent on the Mars surface.

Mars rotational period and tilt of the rotational axis relative to the ecliptic plane are matching to earth, which makes days and seasons similar to earth.

There are two small irregular shaped moons Phobos and Deimos. The diameter of mars is about half the diameter of the earth, and the surface area is slightly less than the earth’s dry land.

The mass of mars is 11 % of the earth’s mass and volume is about 15 % of earth’s volume. Therefore Mars is less dense than Earth and has about 38 % of earth’s surface gravity.

The core of Mars consists of iron and nickel with about 16-17 % sulphur. The core is surrounded by Silicate mantle. The crust of Mars is made of silicon and oxygen with the most abundant elements being magnesium, aluminum, calcium, and potassium. The surface of Mars is made up of tholeiitic basalt. Martian soil is slightly alkaline and contains elements such as magnesium, sodium, potassium, and chlorine.

Mars has a low atmospheric pressure, less than 1 % that of earth’s. Mars has two polar ice caps that appear to be made largely of water. Methane is found in the Mars atmosphere and it is supposed to be released from discrete regions. climate on Mars is like earth because of the similar tilt of the rotational axes. Mars distance from the sun is greater than earth and a martian year is about two earth years. Martian seasons are about twice the earth’s in that of length.

Mars has large dust storms, which occurs when the planet is closer to the sun. Mars has been explored by a number of spacecraft which includes orbiters, landers, and rovers. These spacecraft have been sent to study the planet’s surface, climate, and geology. Some of the spacecraft which are launched are Mars Odyssey, Mars Express, Mars Reconnaissance Orbiter, MAVEN, Mars Orbiter Mission and EXOMARS, etc. There are future plans to launch spacecraft and human mission to Mars.