Compressor: Compressor compresses the inflow air which results in an increase in air pressure. A compressor is made up of fans with many blades which is attached to a shaft. The high pressure squeezed air is passed into the combustion chamber.

Combustor: Compressed air from compressor is passed into the combustion chamber where fuel is sprayed from the nozzle. The mixture of air and fuel burns and produce a high temperature and high-energy airflow. There is a expansion of the gas.

Nozzle: Airflow after passing from turbine exhausts from the nozzle producing the thrust. The high-energy of the air-flow is lost after passing the turbine and and there is also addition of cooler air which is bypassed in the engine core, this leads to generate a force when exiting the nozzle.

The fuel which is consumed by a jet engine physically depends on the thrust produced by the engine. When an airplane is flying at minimum thrust required, the jet airplane has a maximum endurance.

Range of jet airplane also depends on density of atmosphere. Range is increased if density is low. But at extremely high altitudes, ordinary turbojet engine has a decrease in performance. Range of a jet engine is lowest at sea level and it increases with altitude up to a point.

So, jet engine is a device which takes in air at a freestream velocity at inlet, there is combustion with fuel inside the duct and then blasts of hot mixture of air and combustion products at the backend at a very large velocity.

So, jet engine creates a change in the momentum of the gas by increasing the velocity of the small mass of intake air.

Ramjet engine: A ramjet engine does not have any rotating machinery like fans or propellers like in a turbojet. It is simply a straight through duct. In a ramjet engine air at a high velocity is inducted through the inlet, which is decelerated in the diffuser and after that burned by the injecting fuel, which later blast out the exhaust nozzle at a very high velocity. Ramjet engine is the best choice for future hypersonic vehicles. 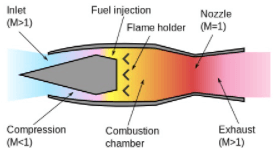 However, a ramjet does not have any moving parts and turbines, so there is no high temperature material limitation.

There can be a higher combustion chamber temperature and therefore a higher supersonic flight velocities. A ramjet engine can have a Mach number above \(3\) or \(4\).

So, a scramjet engine can make the hypersonic flight possible. Scramjet powered flights are envisioned for Mach numbers of at least \(15\).

In a hypersonic vehicle having a scramjet engine the airflow is passing through one or more shock-wave systems from the leading portion of the vehicle. Therefore, it is required to tailor the aerodynamics of this inflow air to have the most efficient engine performance.