What are the instruments that are present inside an aircraft’s cockpit?

What are the instruments that are present inside an aircraft’s cockpit?

Six flight instruments, which are used in aircraft’s flight are airspeed indicator,  altimeter,  gyro horizon,  direction indicator, vertical speed indicator and turn-and-bank indicator. The “basic six” layout of grouping the instruments is shown below. With the development and coming of new aircraft instruments the position is in “basic T” layout. It is in standard locations so that flight related information can be gathered. 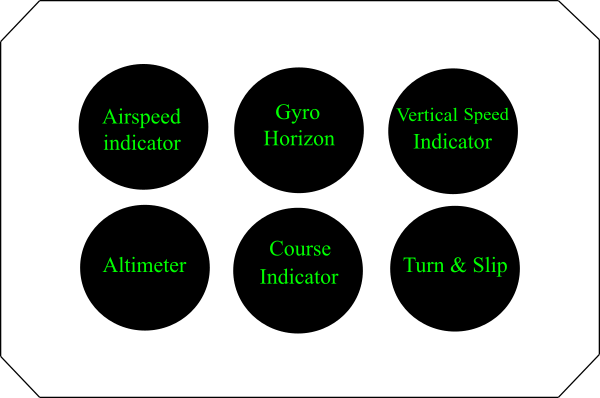 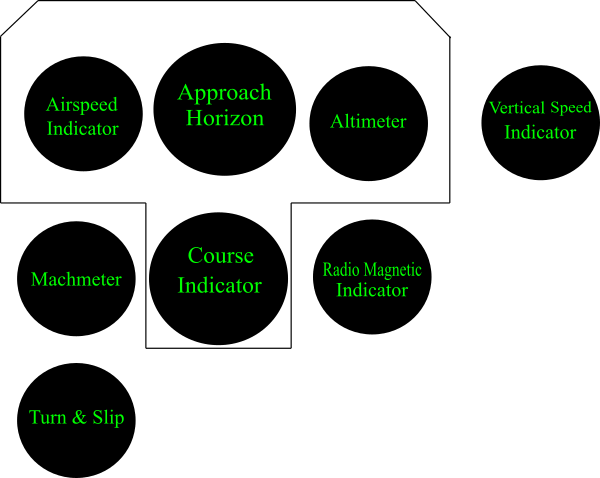 A simple barometric altimeter consists of a sealed metal chamber, spring and pointer. When there is a decrease in air pressure chamber expands and when there is a increase in pressure the chamber contracts. This makes the spring to bend which leads to move the pointer.

Now, altimeters are made which uses global positioning system. It uses signals from different satellites to determine the altitude. There are also radar and laser altimeter. It sends a radio or laser signal towards the surface of earth and time taken by the signal to bounce back, is used to measure the altitude.

Airspeed indicator indicates the airspeed of an aircraft in terms of kilometres per hour, knots, miles per hour or meters per second. Airspeed indicator
measures the pressure difference between static pressures detected from pressure probe and total pressure of the pitot tube.

Machmeter: Machmeter shows the ratio of airspeed and the speed of sound.

Vertical speed indicators: These indicates the rate of climb of an aircraft by indicating the rate of change in altitude, using pitot-static flight instruments. Altitude change is measured from the change of static pressure only.

Gyro horizon: It indicates the pitch and bank attitude of an aircraft, which is relative to the vertical. Gyro horizon uses displacement gyroscope. There are also vacuum-driven gyro horizon and electric gyro horizon.

Turn-and-Bank indicator: It uses gyroscope and a magnetic compass, and is primarily used on small aircrafts. Turn rates is indicated by the rate gyroscope which is using gyroscopic precession. Mechanical methods for bank indication uses a gravity weight and pointer mechanism and other method as a ball in a glass tube which is curved and is filled with liquid.

Tachometer: Speed of aircraft engines are measured by tachometer. For reciprocating engines the speed of crank-shaft is measured. For turboprop and turbojet engines rotational speed of compressor shaft is measured. This measurement gives a useful indication of thrust produced by the engine.

Flight director system: It consists of an approach horizon and a course deviation indicator. Flight director attitude indicator represents aircraft attitude and instrument landing system information which is in a 3-dimensional display. Attitude is indicated by a stationary delta-shaped symbol that represents the aircraft and bank and pitch commands which is displayed by two pointers or by command bars or horizon bar. Command bars move up and down to show a change in pitch or rotate clockwise and anti-clockwise for change in bank attitude.

Course deviation indicator: Aircraft is represented by a fixed symbol at the center which indicates the position and heading of the aircraft. 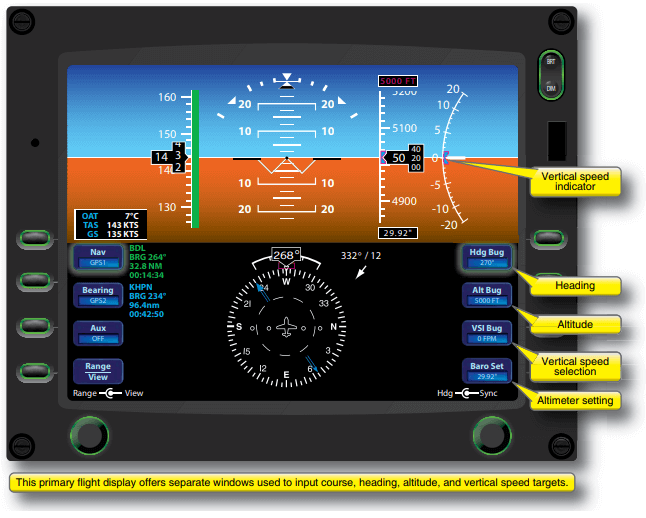 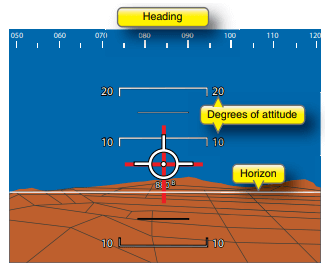