What are the roles of ailerons and flaps in an aircraft?

What are the roles of ailerons and flaps in an aircraft?

Ailerons are one of the three basic controls on an airplane which are designed and used to change and control the moment. Ailerons can be deflected back and forth by pilot. Ailerons are mounted at trailing edge near the wing tips.

The function of ailerons or other conventional control surfaces like elevators and rudder is to change one equilibrium position of the airplane to another and to produce nonequilibrium accelerated motions like maneuvers. 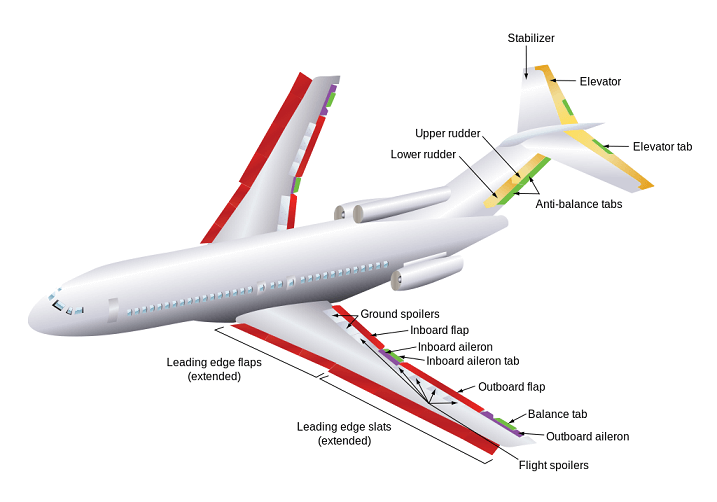 Flaps and ailerons in an aircraft

Flaps are a mechanism to generate high lift. The lowest speed at which an aircraft can fly in a straight and level flight is called the stalling speed.

A wing with a given airfoil shape, maximum coefficient of lift is fixed.

Lift produced by an airfoil depends on the physics of flow over the airfoil. Flaps, which are located at trailing edge of wing are used to increase the lift. When flaps are deflected downward, there is an increase in the camber of the airfoil with an increase in maximum coefficient of lift of the wing.

If the flaps are designed to translate rearward so that effective wing area is increased along with rotating downward, \(C_{L,\,max}\) can be increased by a factor of \(2\).

An aircraft has lowest flight velocities during take off and landing and flaps play critical role. During take off, flaps are set downward at a moderate setting, to have a high lift and low drag. During landing flaps and slats are deployed fully, so that there is a high lift and high drag.

Slats are moving parts  which are present at the leading edge of the wing.