What is earth made of?

What is earth made up of?

Earth is a planet of the solar system which is third from the sun and is the only one that supports life. Earth is estimated to be formed nearly 4.5 billion years ago. It has an abundance of water and its chemical composition and environment favors life. Seventy percent of the earth’s surface is covered with water. 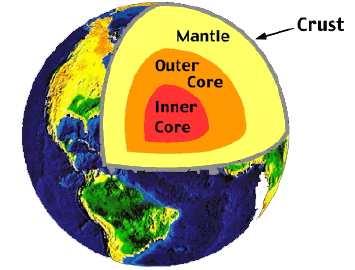 Above the outer core is the mantle. It is about 2900 kilometers thick and has a viscous mixture of molten silicate rock. Outermost layer is the earth’s crust. It is about 30 kilometers deep on land and 5 kilometers deep from the seafloor. Earth’s crust is abundant with solid rocks and minerals which are in silicates. Lithosphere that consists of the crust and the upper part of the mantle is broken into tectonic plates which moves allowing heat to escape into the atmosphere.

Earth’s land surface is covered with plains, mountains, valleys, rivers and lakes. Its atmosphere consists of gases mostly nitrogen and oxygen. Other gases such as argon and carbon dioxide are in a very small percentage.